MultiMode for Mac OS X can decode DGPS (Differential Global Positioning System) transmissions. DGPS stations transmit the difference between positions indicated by GPS satellite systems and the known fixed position of the station. This allows higher accuracy. DGPS transmissions are 100 or 200 baud and are transmitted on frequencies from 285 kHz to 325 kHz. They can be interesting DX targets.

A copy of MultiMode can be downloaded here: http://www.blackcatsystems.com/download/multimode.html

You can listen to an example DGPS audio recording

Select the baud rate, either 100 or 200 baud, using the button. Also be sure to set your location so that the correct distance and bearing is calculated. Eventually, if you have tuned into a DGPS transmission that is strong enough, you will start seeing decode messages printed:

The Short Demod button can be toggled on, in which case MultiMode will look at a smaller part of the DGPS packet. This often allows decodes of weaker transmissions.

Note that since no error checking is performed on the packet, it is possible to get false decodes. To help determine if you are actually receiving the correct station, compare the printed frequency for that station to what your radio is tuned to, to verify they match. Also look for several decodes from the same station in a row, that indicates that you probably are really receiving that station.

Here’s a list of some stations I have received here with a modest 200 ft random wire antenna:

Tune into the 43 meter pirate radio band, which is roughly 6800 to 7000 kHz, but 6925 kHz in particular, on any given evening, and you’re likely to hear one or more broadcasts. While many stations transmit throughout the year, there are a few seasonal stations that you will only hear on certain days. To help you keep track of these stations, here’s a short summary of the more widely reported seasonal pirates. Note that the schedules of pirate radio stations are very flexible, and often broadcasts of these seasonal stations will be heard on a nearby weekend instead of the actual holiday, when there are usually more listeners.

I’ve also included QSLs from some of the stations.

WMLK – Recordings of speeches by Martin Luther King Jr, usually around his celebrated birthday, the next is January 18, 2016.

Voice of Pancho Villa – Heard during the time the NASWA Winter SWL Fest, which is usually in February. Frederic Chopin Radio – Plays classical piano music, heard on our around his birthday of March 1.

Radio Cinco De Mayo – Heard on or around the Mexican Holiday on May 5. KHAQQ / Amelia Earhart Often heard on or around July 3, with simulated communications between ground station NRUI and Earhart (KHAQQ), trying to locate her.

Radio Paisano – A program of Italian related music which airs around Columbus Day, which is next observed October 10, 2016. Edmund Fitzgerald Radio – Commemorates the sinking of the ship with the Gordon Lightfoot song as well as recordings of marine communications. Heard on November 10.

Another variant has appeared in recent years, which plays recordings of news announcements of the assassination. D. B. Cooper Radio – Heard on or around the day before Thanksgiving.
Related to the hijacking of a Boeing 727 on Wednesday, November 24, 1971. 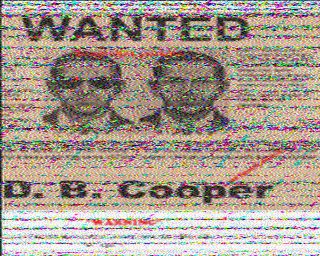 Turkey Breast Radio – Heard on or around Thanksgiving.

Happy Hanukkah Radio – Heard during the eight days of Hanukkah. Usually the following is heard:
“Miracle of Miracles” from Fiddler on the Roof
“Hava Nagila” by the Effi Netzer Singers
“2000 Year Old man” skit by Mel Brooks.