My goal is to built a Z80 system along the lines of some of the early CP/M machines. A long long time ago in a far away former life, I worked in industrial controls, and some of the systems were Z80 based. So let’s see how much I still remember.

To get things started, I decided to first go down the emulator route before building any real hardware. I grabbed a copy of z80emu and got it running in xCode in an hour or so. It came with some text ROM files that exercise the emulation, to make sure everything is working correctly.

I found this site: Z80 Monitor Type Operating System and SBC where the author build a very simple Z80 system (Z80, RAM, ROM, 8251 UART).
So for the next step, I got that ROM working in the emulator, and modified the code to route UART output to the stdout. So far so good. Then I kludged something together to read input from XCode’s debug terminal, which also worked. Yay.

Then changing gears a but I wanted to experiment accessing a SRAM chip. I connected a 32Kx8 SRAM to an Arduino Mega 2560 and verified I could write and then read back correctly from several memory locations. This was not emulating a Z80 or
anything, just testing I/O from the Arduino. 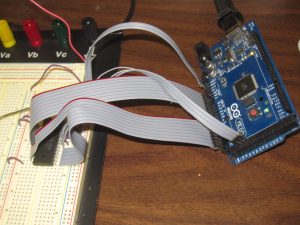