Boom Box Radio had an early morning transmission on March 10, 2013, from 1044 until 1212 UTC. They were trying to reach a listener in Guatemala. The time of this transmission, starting just before to after sunrise, lets us examine the effects of sunrise on reception on the 43 meter band.

This first waterfall shows when Boom Box Radio signed on at 1044 UTC. You can see a very faint trace appear on the waterfall about a quarter of the way up from the bottom, at 6925 kHz. Remember that with a waterfall, time flows or falls down, like with a real waterfall, so the latest information is at the top: 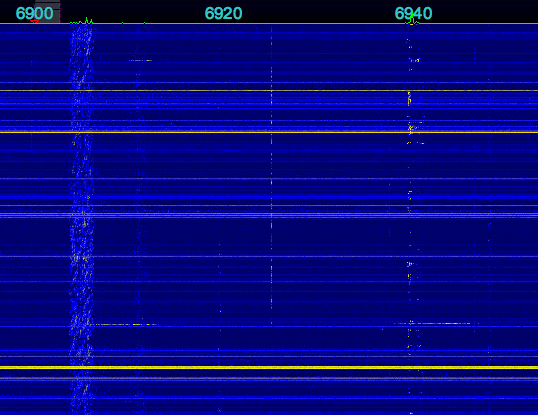 This next waterfall shows what happened at 1107 UTC, when the signal went from just a faint trace of a carrier on the waterfall, and no audio, to a very good S7 to S9: 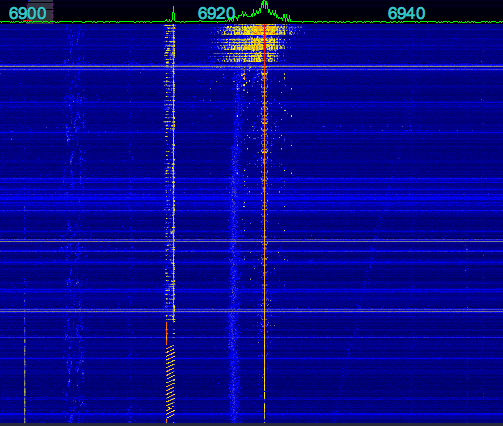 Note again that the oldest information as at the bottom of the waterfall. At that time, there is just barely a carrier. Then you start to see some modulation, and then finally, in a matter of seconds, the signal shoots up to armchair quality.

Below is a graph showing the signal strength of Boom Box Radio, in dBm, from 1044 UTC sign on, until 1212 UTC sign off. You can click on it to see a larger version: 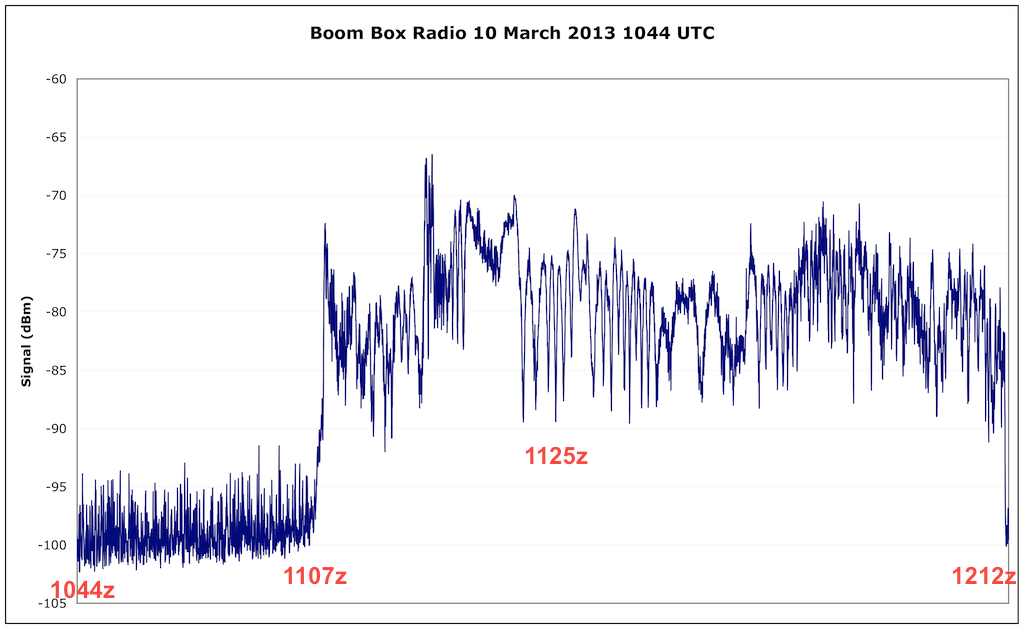 You can see that there is a very slow increase in signal level after the sign on, but the signal remains extremely weak. Then suddenly at 1107 UTC, the signal shot up to S9. Then for the rest of the transmission it mostly stayed in a range between S7 and S9.

The sudden increase in signal was caused by the Sun increasing the ionization level of the F layer of the ionosphere. This increase needs to have occurred at the point in the ionosphere where the radio waves are being reflected, most likely roughly midway between the transmitter and receiver locations. Note that in my case, this occurred before my local sunrise. This could be due two at least two factors I can think of. First, the transmitter site could be to my east. Second, the ionosphere is several hundred miles up, so it experiences sunrise before a point directly below it (on the Earth’s surface) does.

I believe this graph shows the importance of selecting the correct time for transmissions, depending on your target area. Just before sunrise is when the ionosphere is the weakest, and is only able to reflect radio waves on 43 meters at low angles. Too early in the morning, and the band is not open for local (NVIS – Near Vertical Incidence Skywave) reception. The band is, however, open for reception to more distant locations, that is, more than many hundreds of miles away (well over 500, perhaps close to 1,000 miles). If you’re trying to get out to DX locations, this is a good time to do it. Sunrise varies throughout the year, so as we move into summer, and it occurs earlier, the band will likewise open up earlier for NVIS. Likewise in the middle of winter in December, it is somewhat later.

For reference, the operator of Boom Box Radio stated that this was a Heathkit DX-60 transmitter putting out 40 watts into a 40 meter band dipole that was about 15 feet high.

Update: The operator contacted me again to mention that his local sunrise was at exactly 1107 UTC.