To gauge shortwave pirate radio activity in 2020, I analyzed the Shortwave Pirate loggings forum of the HF Underground (http://www.hfunderground.com). A computer script parsed the message thread titles, as well as the timestamps of the messages. This information was used to produce some statistics about the level of pirate radio activity. Of course, as Mark Twain has written: “There are three kinds of lies: lies, damned lies, and statistics.” A fourth might be pirate logging message titles. Don’t expect all the numbers to exactly add up. Still, let’s see what we can learn.

There were 15,545 messages posted to 2,400 unique threads, 29% and 10% higher than last year. Shortwave pirate activity is at historically high levels. Back in the 1990s, it was not uncommon for an entire month to go by with only a handful of pirate stations logged. If you want to know when the “golden age” of shortwave pirate radio was, I would say it is right now. 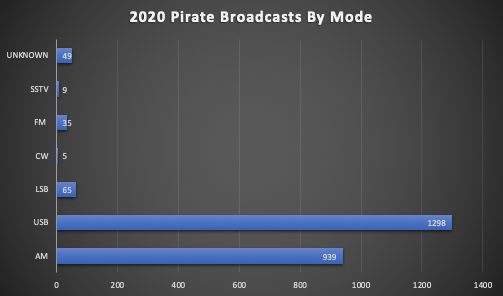 USB again leads AM, with the other modes rarely used. 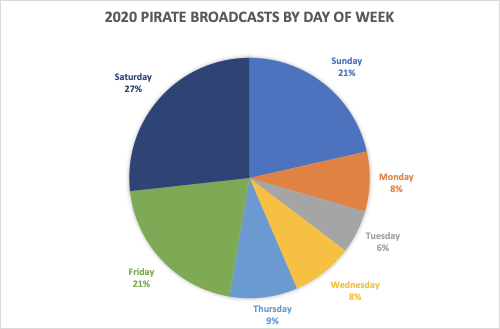 Weekends (Friday, Saturday, Sunday) are still the most active, but almost a third of broadcasts were on other days of the week. 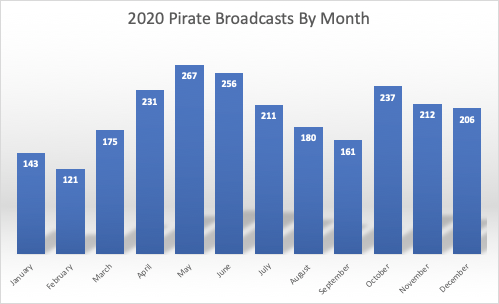 Some seasonal variability, but still very active throughout the entire year. 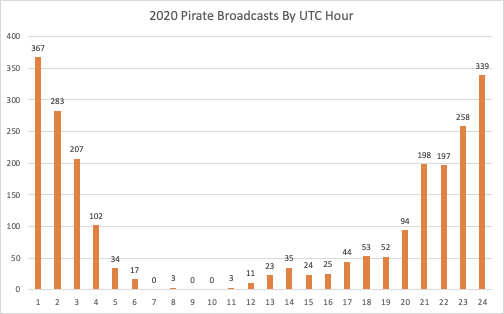 Evenings are most active as expected, but still lots of morning and afternoon broadcasts. The wee hours were very quiet, probably due in part to the low solar activity levels.

Halloween really sticks out this year!

The shift to the 4 and 5 MHz bands for many stations is quite evident, driven by the solar minimum conditions making 43 meters useful mostly for just long distance propagation at night. Still, it is the most active pirate band.