The GOES 15 weather satellite (the one that is in geostationary orbit and provides the animated views of the weather over the US that you often see on the TV news) also has a set of sensors that monitor the Sun. One of these measures the x-ray output.

These x-rays are produced by sunspots, as well as by solar flares. The x-ray flux we’re interested in is measured in the 1 to 8 Angstrom range (that is the wavelength) and is the red line on the graph below (the blue line is the 0.5 to 4 Angstrom range, x-rays of a shorter wavelength):

The URL for this graph is http://www.swpc.noaa.gov/rt_plots/Xray.gif

In addition, there is a graph that updates at a 1 minute rate, located at http://www.swpc.noaa.gov/rt_plots/Xray_1m.gif

X-ray level measurements consist of a letter and number, such as B6.7, representing the x-ray flux in watts/square meter. It is a log scale, much like what is used for earthquakes. A value of C1.0 is ten times as large as B1.0 (and would be equivalent to B10). Values in the A range are low background levels, such as at solar minimum. B values are a moderate background, and C values are either a high background or solar flare conditions. Flares usually result in short bursts of large x-ray levels, in the C, M, or even X range. Remember that this is a log scale, so an M1 flare is 10 times as energetic as a C1 flare, and an X1 flare is 100 times. There is a new Y classification as well, so a flare that would have been say X28 in the past would now be Y2.8.

These x-rays ionize the D layer of the ionosphere, which attenuates radio waves. So high x-ray flux levels increase attenuation of radio waves, especially at lower frequencies. Below is a map of D layer absorption:

The x-rays also increase the ionization of the F layer (which is the layer that gives us shortwave propagation), although the effect is less than for the D layer.

The net result is that increased x-ray levels cause more attenuation at lower frequencies, but can also lead to better propagation at higher frequencies. Long periods of high x-ray flux levels (well into the C range) may be a sign of good 10 and 6 meter band conditions. I’ve also found that high (C range) levels seem to “stir the pot” for MW DX, bringing in different stations than usual.

Very high flux levels, such as during a major flare (in the high M or X range) however cause radio blackouts. These occur first as lower frequencies, and as the D layer begins to get more ionized higher frequencies are also affected. Extremely energetic flares (X range) can wipe out all of HF. Note that this is only true for propagation paths on the sunlight side of the Earth. The dark side is not affected. This means that flares can be useful at times, in that they can cause the fadeout of an interfering dominant station on a particular frequency, allowing another station to be heard, providing the geometry of the Earth and Sun are correct such that the path of the interfering station is in the sunlit part of the Earth, while the other station is not.

Solar flares are usually of a short duration, minutes to an hour, although there are “long duration events” that can last for several hours. If you notice suddenly poor conditions, you may want to check the current x-ray flux levels, to see if a flare is the cause. If so, try higher frequencies, as they are less affected.

As we are finally nearing the maximum of Solar Cycle 24 (although it appears it will be a fairly weak maximum) we can expect to see more flares. It can be very handy to continuously monitor the x-ray flux and D layer absorption levels, to see what the current conditions are, and to take advantage of them. One handy way to do this is with DX Toolbox. With DX Toolbox, you can monitor the current conditions, and even get an alert when the x-ray flux exceeds a predetermined alarm value. Some screenshots are below, click on them for a larger image: 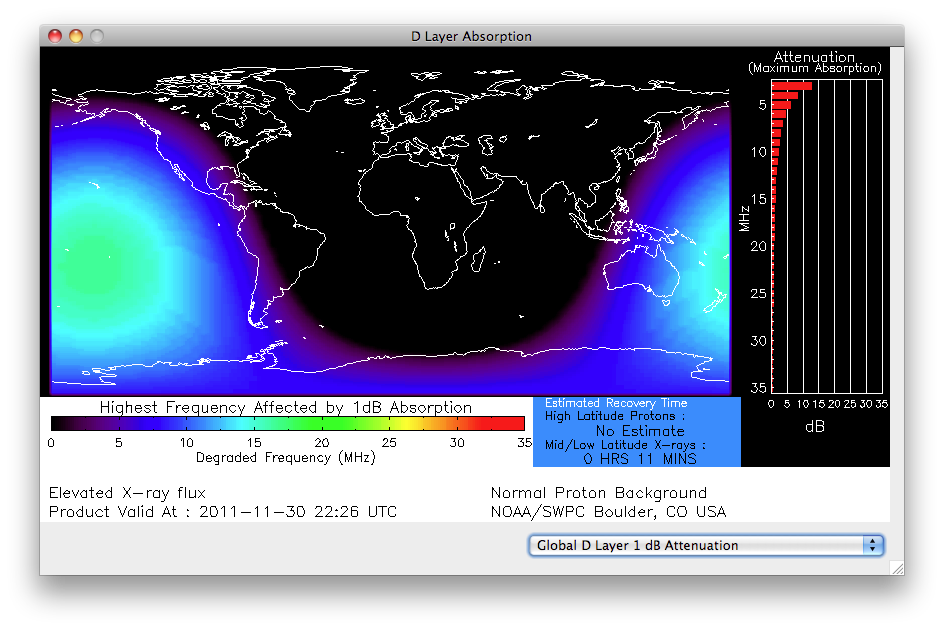 DX Toolbox is available for Windows and the Macintosh, you can download a copy at this URL: http://www.blackcatsystems.com/download/dxtoolbox.html

There is also an iOS version available for the iPhone, iPad, and iPod: 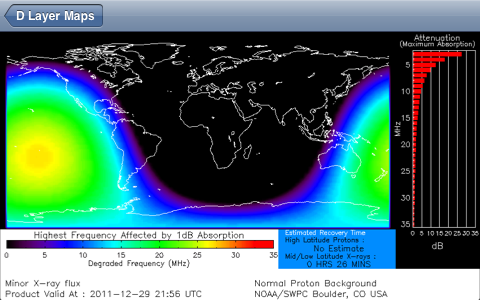 Visit this URL for more information:http://www.blackcatsystems.com/iphone/dx_toolbox.html or go directly to the iTunes Store

DX Toolbox also has several propagation prediction windows, to help estimate signal levels for any path you enter, based on solar conditions.